An ingredient which has vanished entirely from the shops is frozen concentrated orange juice. As a substitute for the real thing, it did indeed have its limitations; but as a cooking ingredient it was unparalleled. One can still guy it, but only in 40-gallon drums. This recipe achieves a similar effect in a different way.

Take a one-litre carton of orange juice. Pour it into a big frying pan and put it onto the stove.

Turn the gas up high and boil the juice to reduce it. The idea is to boil away as much water as you can without boiling it all away. I do this by setting a timer to 5 minutes and having a look (and a stir) every time the timer goes off. After 20 minutes, this is what I got:

Pouring it into a jug, I found that the litre had reduced to 200ml: a 5-to-1 reduction. If I had gone on for another 5 minutes, all the water would have gone and I would probably have had to throw the frying pan away.

Peel them, quarter them, core them, and slice the quarters:

Now put a nice big lump of butter in a clean frying-pan, and fry the slices until they start to colour nicely. The golder the better, and a little blackness here and here won’t be a disaster. But if the slices start to disintegrate then stop, because that isn’t the point.

(By the way, adding cinnamon or allspice or cloves at some point greatly improves the flavour, if you remember to do it).

Now you have a choice. You can simply take the fried apples, serve them and pour the hot orange sauce over them. (You can try improving the sauce, if you like, by pouring a shot of brandy into it while you are heating it up).

Alternatively, having got the apples to the right state of friedness, with the gas turned off but while they are still in the hot pan, you can add some of the reduced orange juice, a bit at a time. Each time you add a bit it will boil, because the pan is still hot, and just as it is turning into caramel you can push the apples around so that it sticks to them and not to the pan. In that case the apples will end up looking like this: 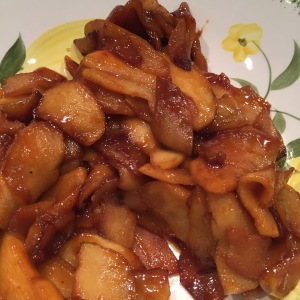 Either way, serve it with double cream, with the [remaining] orange sauce in a jug ready to be poured over the apples. Pouring or whipping cream might be an adequate substitute for double; but I think double cream is really needed to unite the intense sweetness and acidity of the dish.